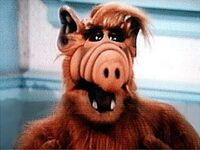 Fans of Alf will be delighted to know that the adorable alien from the planet Melmac will hopefully be returning to the silver screens soon. Sony Pictures Animation along with the show's co-producers will be working on this new film. Paul Fusco will be reprising his role. There is currently very little known about this film except that it is expected to be a hybrid of live action and CG similar to the recent Smurfs movies.

Retrieved from "https://alf.fandom.com/wiki/User_blog:Wagnike2/Alf_Returns_to_the_Big_Screen?oldid=9469"
Community content is available under CC-BY-SA unless otherwise noted.