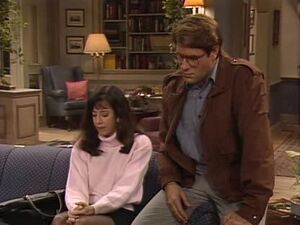 Margaret Tanner, played by Allyce Beasley, is Neal Tanner's ex-wife. She was apparently obese at some point, but went through extensive surgery to lose a significant amount of weight. Margaret's favorite meal was meat loaf, and she would often cook 4-5 pounds of it at a time. She also slept past noon fairly often. Neal and Margaret first met in Future Farmers in high school. Neal lovingly referred to Margaret as "my little chicken taco."

When Margaret convinces Neal to go to Vegas and get remarried, ALF stows away in their trunk to convince Neal that her intentions are not honorable. It seems that she really just wants a stable house, so her 280-pound sister and four sons can move back in with them.

Retrieved from "https://alf.fandom.com/wiki/Margaret_Tanner?oldid=12220"
Community content is available under CC-BY-SA unless otherwise noted.