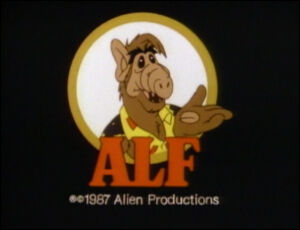 ALF: The Animated Series is an animated spin-off television series of the original ALF series. It originally ran on NBC from 1987 to 1989 and had 26 episodes in two seasons.

The series was created by Paul Fusco and Tom Patchett (and possibly Alex Adam,) the same creators of the live-action series. It follows the adventures of Gordon "ALF" Shumway back on his days on Melmac. Each episode begins with a live-action introduction by ALF, who would break the fourth wall (as talking to the audience when first realizing the camera is on him).

Only 9 episodes of the series have been released for purchase on DVD. All episodes are currently available as streaming video on Amazon Instant Video and Hulu.

The series was a prequel, depicting ALF's life back on his home planet of Melmac. Since the name ALF was an acronym short for Alien Life Form and only given to Gordon Shumway later on Earth, ALF is never used in the animated series except for its title. ALF would always be addressed as Gordon (his true name) or "Gordo" by his friends Rick and Skip. In nearly every episode, the live-action ALF would appear at the introduction and conclusion of the episode; reading fan mail and saying that this show is a response to a huge demand of people wanting to know what his life was like on Melmac.

Much of the humor arises from the characters taking part in surrealistic activities while treating them as ordinary and unremarkable. For example, in order to prove their manhood and win their distinguished antlers, the sons of members of the Mayonnaise Lodge (formed of men who work in the mayonnaise mines) must wrestle a clam and make it sing. Other episodes had issues somewhat similar to Earth issues, such as when Gordon's parents take part in a free vacation while failing to realize it is a time share scam: The scam artist literally steals the Shumway residence and transplants it to the time share plots, then uses brainwashing machines to convince Flo and Bob to buy a house they already own.

Another one which was a play on the original television series was a show which ALF and his family loved about "the Earthling who crash landed on Melmac," where a human was shown saying, "On my homeworld, we keep cats as housepets" and a Melmacian telling him, "Well, here, we eat them!". ALF from this series is one of the cartoon characters featured in Cartoon All-Stars to the Rescue.

There are several contradictions to the many random and various mentions of Melmac made by ALF in the live-action sitcom. One example is ALF saying in Working My Way Back to You that he lived in his parents' garage while he has his own bedroom.

The show aired on Boomerang in Australia. Boomerang is a TV channel owned by Cartoon Network aimed at airing reruns of classic shows that no longer run.

The show has a very memorable doo-wop-style theme song, with lyrics as follows:

In the original version of the theme song, the line "'Cause there ain't no one like you in the Melmacian race" was sung "'Cause there ain't nobody like you in the Melmacian race," where the word "Melmacian" was pronounced in three syllables as MEL-may-shin. Reasons for this are unknown, but the second version of the song (as shown in the lyrics above) uses the 4-syllable pronunciation of "mel-MACK-ee-yan" for which a precedent was set in the ALF TV series.

Community content is available under CC-BY-SA unless otherwise noted.
Advertisement